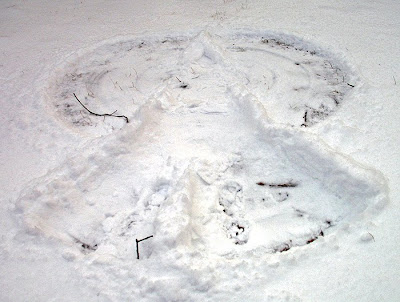 snow angel
made by and photographed by
Jenn Doyle

“Jesus believed in and experienced the ministry of angels:
1. His conception was announced by an angel (Gabriel).
2. His birth was announced by angels.
3. He was tempted by a fallen angel.
4. He was ministered to by angels subsequent to the temptation.
5. His teaching is filled with references to angelic beings.
6. He experienced the ministry of angels in Gethsemane.
7. He could have appealed to twelve legions of angels (Mt. 26:53).
8. [Angels] were present at His tomb following the resurrection.
9. [Angels] were present at His ascension.
The point is that angels
were an integral part of Christ’s birth, life,
ministry, teaching, death, resurrection, ascension,
and will accompany Him at his second advent.
To deny the reality of the angelic world
is to undermine the integrity
of Jesus himself.”
– Sam Storms

“Angels – like all other intelligent creatures –
were designed to render worship to God,
not to receive worship themselves.
In fact, in every case in Scripture,
whenever angels are offered any form of worship,
they always rebuke the worshiper
and redirect all worship to God alone
(cf. Rev. 19:10; 22:8-9).
- John MacArthur


On the other hand…

“I have no doubt that some who claim
to commune with angels
really have been able to establish a link
with angelic beings –
though not in the way they seek.
Scripture warns us plainly that Satan
and his messengers often appear
as angels of light (2 Cor. 11:13-15).
In other words, demonic beings
take advantage of the gullibility of people
who are actively seeking to communicate
with the spirit world.
“Angelmania” turns out to be sheer occultism,
with all its horrible effects.
Many people have been drawn into
serious demonic bondage by these practices,
and Christians should be
strongly warned against them.”
- John MacArthur

“Nowhere does Scripture
encourage us to have an angel-fetish,
or to look for evidence
of angels in everyday life…
[Furthermore] biblical appearances of angels –
unlike those of popular lore –
often cause trauma and great fear
(Matt. 28:4; Luke 1:29; 2:9).”
- John MacArthur

“In Scripture the visitation of an angel
is always alarming;
it has to begin by saying “Fear not.”
The Victorian angel
looks as if it were going to say,
‘There, there.’”
- C.S. Lewis

Posted by techranger at 9:14 AM