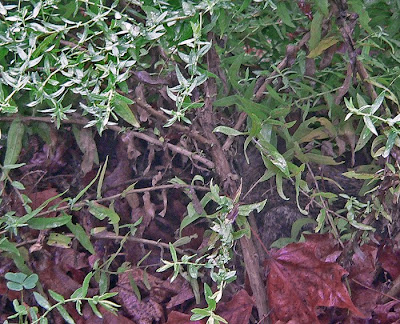 This bunny made a hollowed out nest for itself
under my “October Skies” blue aster…
probably the same bunny that had been eating
all the new growth from several other of my
surrounding native plants.

The surprise is that, lately, it hasn’t touched
any of the plants on which he had been feeding.

I guess it was ok to “chomp down”
the plants when it wasn’t near where it lived.
Kind of reminds me of those
who can ravage the landscape for profit
as long as “they” don’t have to live near it.

Perhaps it was performing a service
by pruning the new vegetative growth until
the root system of the new plants
became stronger and more established.

Whether good intent or not,
it was raining when this photo was taken
and I just didn’t have the heart
to scare it away.

“Some people, in order to discover God, read books.
But there is a great book:
the very appearance of created things.
Look above you! Look below you! Read it.
God, whom you want to discover,
never wrote that book with ink.
Instead He set before your eyes
the things that He had made.
Can you ask for a louder voice than that?”
- St. Augustine