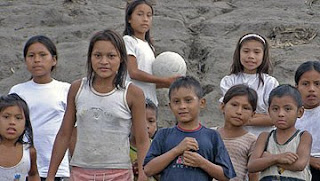 What is it to be poor?
photo by David Keller
(trip to Peru)

Their needs were met
and they were all very happy together...
contented.

Now I realize the difference between being poor,
living in poverty, and not having needs being met.
Here I'm referring to having the basics
without all the frills that most of us have...
TV sets, cars, etc.

I would bet that even some reading this
would say...hey... cars and TV sets are needs.

Perhaps it is somewhat relative dependent
on how well off we are and what we classify as our "needs",
but I'm talking about basic needs...
food, water, clothing, and a roof over our heads.

"I met in the street a very poor young man who was in love.
His hat was old, his coat worn,
his cloak was out at the elbows,
the water passed through his shoes, -
and the stars through his soul."
- Victor Hugo

What It Means To Be Poor

"One day a father of a very wealthy family
took his son on a trip to the country
with the firm purpose of showing his son
how poor people can be.
They spent a couple of days and nights
on the farm of what would be considered
a very poor family.

With this the boy's father was speechless.
Then his son added,
"Thanks dad for showing me how poor we are."
- Author Unknown

Posted by techranger at 5:00 AM