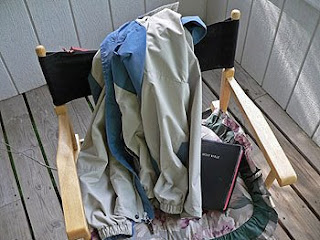 The coat of faith
What is more likely to cause a Christian
to forget God and/or abandon Him?
Have you ever been told by someone
that is it is easy for you
to believe and trust in the Lord
because you haven't experienced their woes...
their trials and their tribulations?
The idea being that it is easy to have faith
when everything is going so well for you.
I submit that it is far easier,
and more subtle, for man
to leave God's presence,
ignore, and even forget Him
when he grows to feel less "needing"
and more self-sufficient.
The Bible is filled with such stories.
In the Aesop fable about the dispute
of who was more powerful...
the North Wind or the Sun...
it was the North Wind that brought to bear
all of his stormy weather
against the man
in an attempt to remove his coat.
All that the North Wind did
was to cause the man to wrap his coat
more tightly around himself.
If we let the man's coat be a symbol
(and represent) his faith,
the same can be said
for the effect of the storms of life on us.
Those trials and tribulations,
while causing some to curse
and/or to question God,
most often cause us
to more tightly cling to our faith
even as we are brought to our knees.
In the same Aesop fable,
it was the sun that proved more powerful.
Bestowing sunshine and warmth
upon the man caused him to
"voluntarily" remove his coat.
We must always be very careful of allowing
our highly blessed and worldly successful selfs
from becoming too self reliant
and thus less needful of God.
We must completely die to self,
be ever mindful of Him,
and allow Him to take
permanent command of our lives,
trusting Him, praising Him,
and thanking Him
for all of His love and His grace.
"For therein is the righteousness of God
revealed from faith to faith:
as it is written,
The just shall live by faith."
- Romans 1:17 KJB
"Therefore being justified by faith,
we have peace with God
through our Lord Jesus Christ:"
- Romans 5:1 KJB
Posted by techranger at 5:00 AM