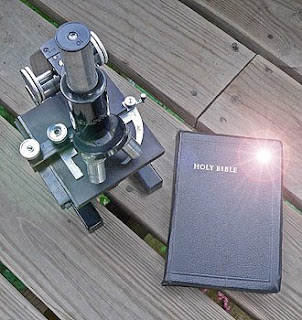 searching for the truth
Faith and Science...do they clash?
(part 2)
Jesus Christ was a carpenter by trade.
As a young man Jesus learned to work with wood
eventually developing His own style.
It is quite possible that when finished with a piece,
others who were familiar with His style would be able to say,
"that was made by Jesus Christ...
see how He formed the... "
I'm not saying that God necessarily has a particular style
that He used throughout His creation
but He did create all the "laws" of nature and the universe.
And God doesn't change...
His Laws and His Word are the same now
as they always were. He works with strict
adherance to His own Laws that He created.

In the old testament a pure sacrifice was needed as a sin offering.
God in His great mercy did not
provide another "way out" for man...
He abided by His own Law.
A sacrifice was needed that was pure (without sin)
and had to be of such a magnitude that would show
God's inifinite love and one that would
wash away all the sins of all mankind.
Now I don't propose to know how
God made a pillar of fire (spontaneous combustion?)
or how Jesus walked on water (saline density?)
or any of the other "miracles" of God and Jesus,
but I do know that nothing
is beyond His capability
to accomplish His plan and to do His will.
And I can't help but believe that He accomplishes His "miracles" within
the boundaries of His created Laws.
Afterall, He could have simply picked up the Israelites and set them down again...
He could have simply appeared on the boat
instead of walking across the water to get there.

But, then again, the Lord does nothing without a purpose...
without it fitting into His plan for man...
there are now, and has been,
many lessons for man to learn.
So when man gleans a little more
of the mysteries of life and the universe...
and they lead to a plausible explanation
of how a "miracle" may have been accomplished,
it doesn't dimish our God...
it makes Him more awesome.
Instead of saying... "there goes another miracle to science",
we should be saying how privileged we are to have learned
a tiny bit more of how God has worked (and is working)
within His creation... giving Him the glory
and not us.

All those miracles...
such as the age old miracle of birth...
is not any less of a miracle to me
just because I know the scientific process of birth.

Science for me is the study of God's creation
not the glorious accomplishments of man.
I, for one, am looking forward to learning more...
at the Master's feet.
Posted by techranger at 5:00 AM