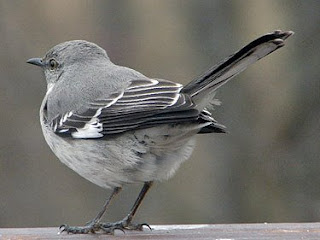 Northern Mockingbird
photo by Bob Johnson
(courageous bird at defending its nest and its territory)
"They're certainly entitled to think that,
and they're entitled to full respect for their opinions...
but before I can live with other folks
I've got to live with myself.
The one thing that doesn't abide by majority rule
is a person's conscience."
- Harper Lee
To Kill a Mockingbird,
Chapter 11,
spoken by the character Atticus
"Through pride we are ever deceiving ourselves.
But deep down
below the surface of the average conscience
a still, small voice says to us,
'Something is out of tune.'"
- Carl Jung
"To sin by silence when they should protest
makes cowards of men."
- Abraham Lincoln
"Last, but by no means least,
courage—moral courage,
the courage of one's convictions,
the courage to see things through.
The world is in a constant conspiracy against the brave.
It's the age-old struggle...
the roar of the crowd on one side
and the voice of your conscience on the other.
- Douglas MacArthur
Posted by techranger at 8:00 AM